A/B Tests gives developers the ability to optimize their games by running experiments on different groups of users in their games. 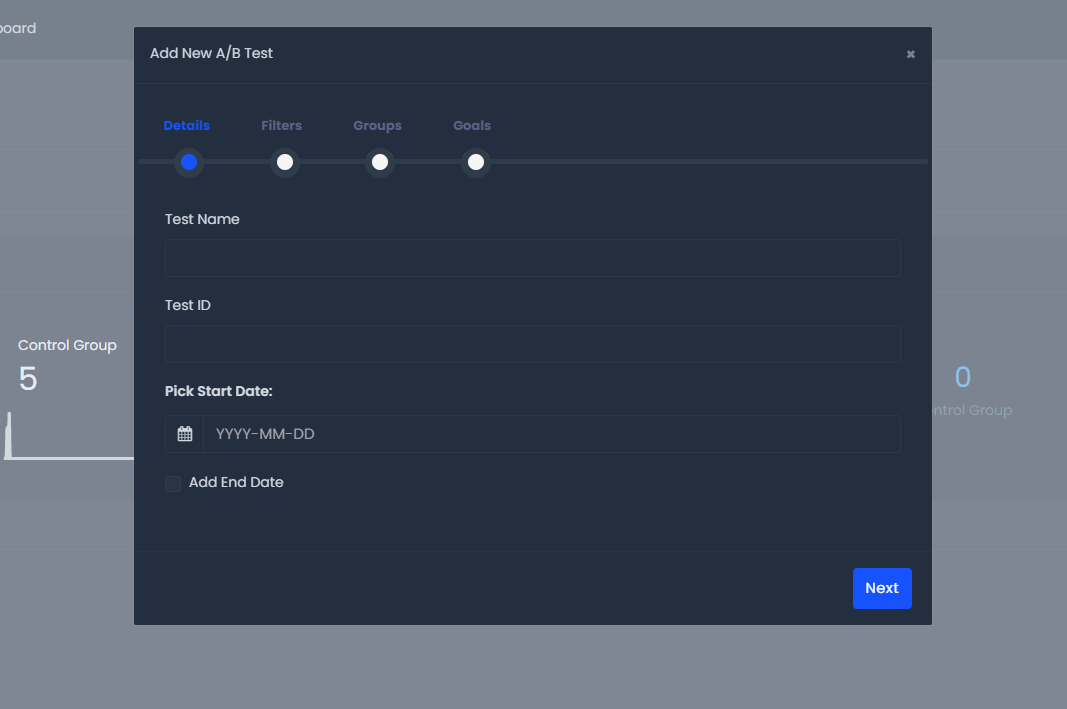 Fill in the name the test. This will only be used by you to reference the test.

Add the Unique ID of the test. This will only be used by you to help identify the test in the dashboard filters.

Set the start date for the test.

You can also set a end date for the test. 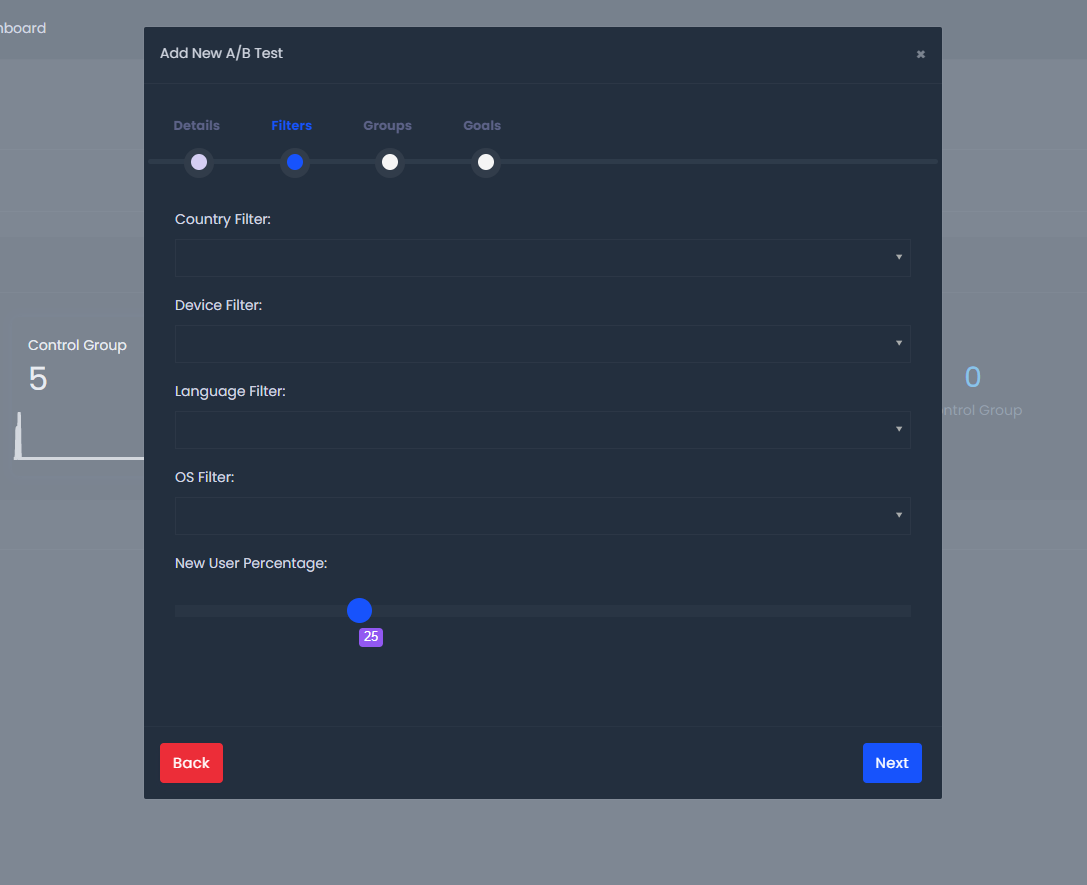 Select user filters you'd like the A/B Test to target users by such as: User Geo, Device, Language, and Os Version.

Slide the meter to set the percentage of new users you want to be included in the test. 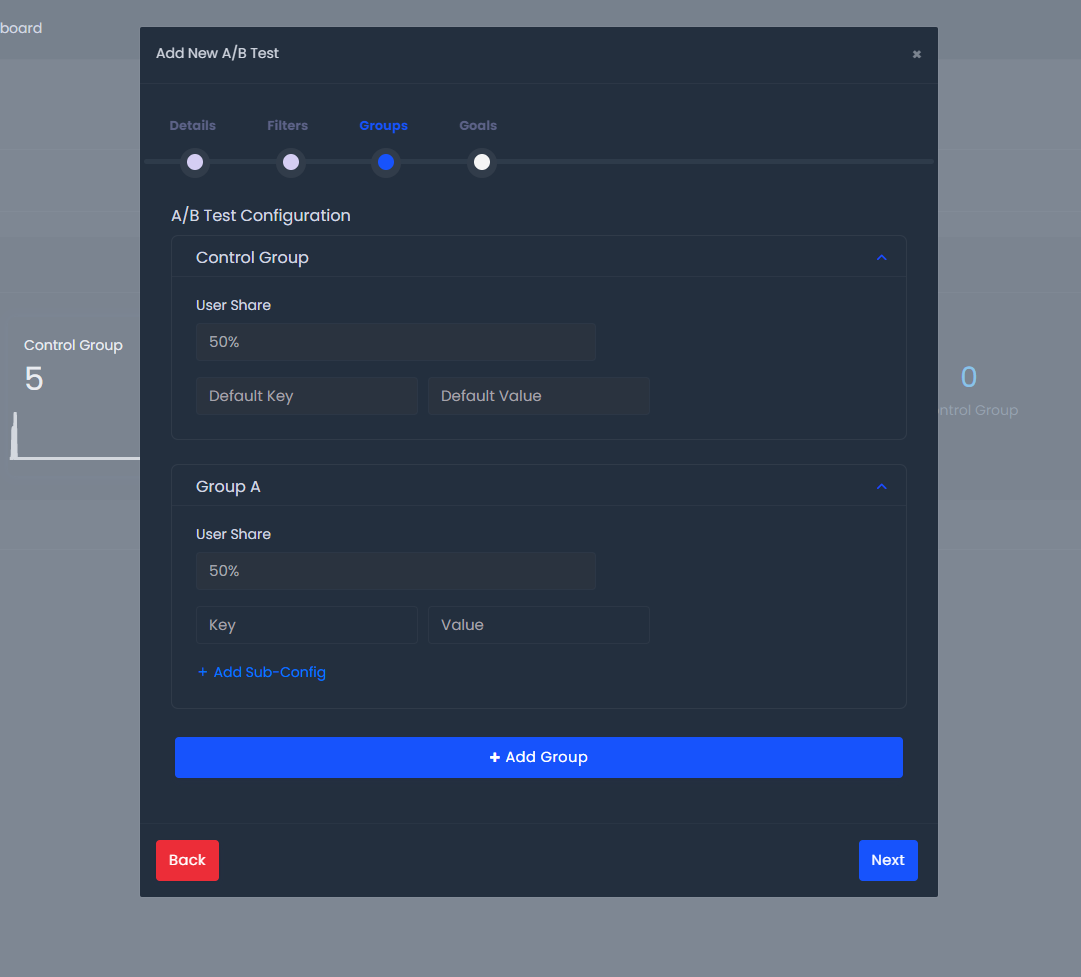 Add user groups to your test equal to the number of configs you want to distribute in the experiment. Each time you add a new group, the user share percentage will adjust to evenly distribute new users to that group.

Input your config key value pairs into your different groups

Input the key value pairs into each group you've added. A/B tests will be distributed like a remote configs to users.

Remember your config key's. These keys will be used when retreiving the remote configs in the SDK. 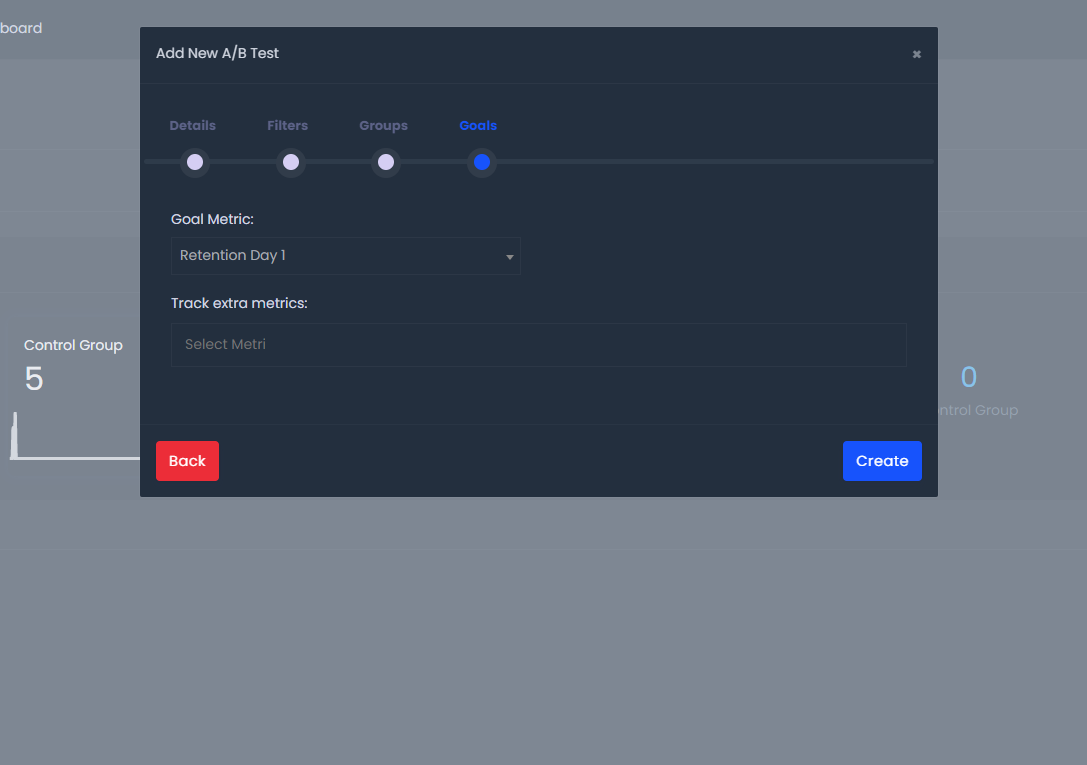 Select your test's goal metric you'd like to analyze during the experiment.

Using the dropdown, select any other metrics you'd like to track during the test. You can select as many metrics as you'd like. 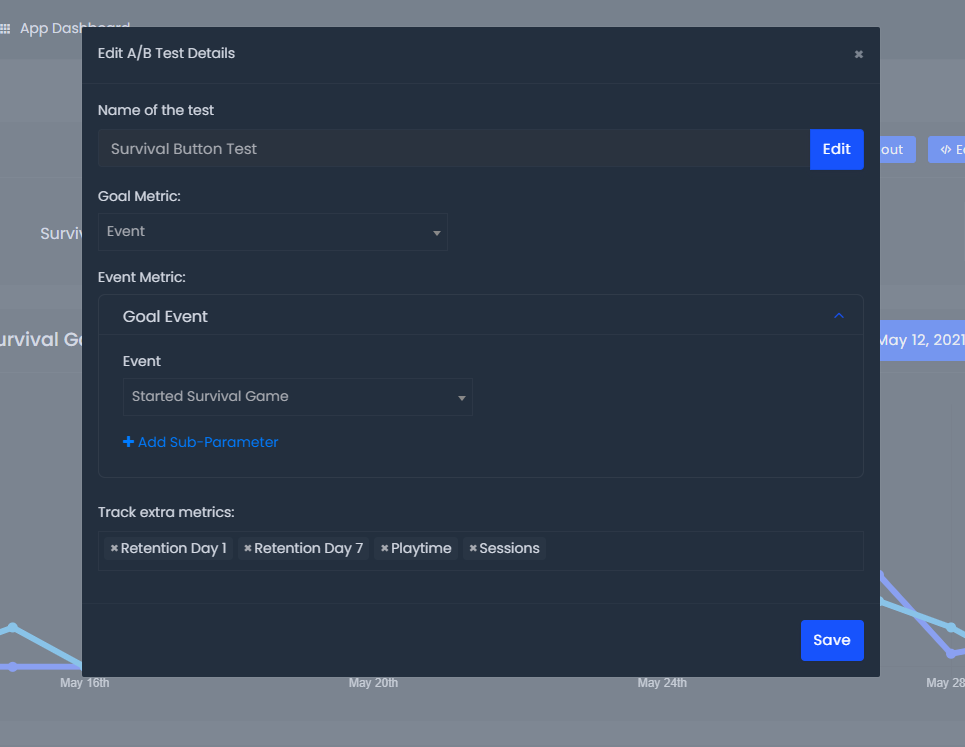 The following attributes on an A/B Test's Details can be edited:

You can change the name of the A/B Test.

If you want to start analyzing a different the goal metric, you can update your selected Goal Metric.

You can add or remove metrics you want to track using the Extra Metrics dropdown. 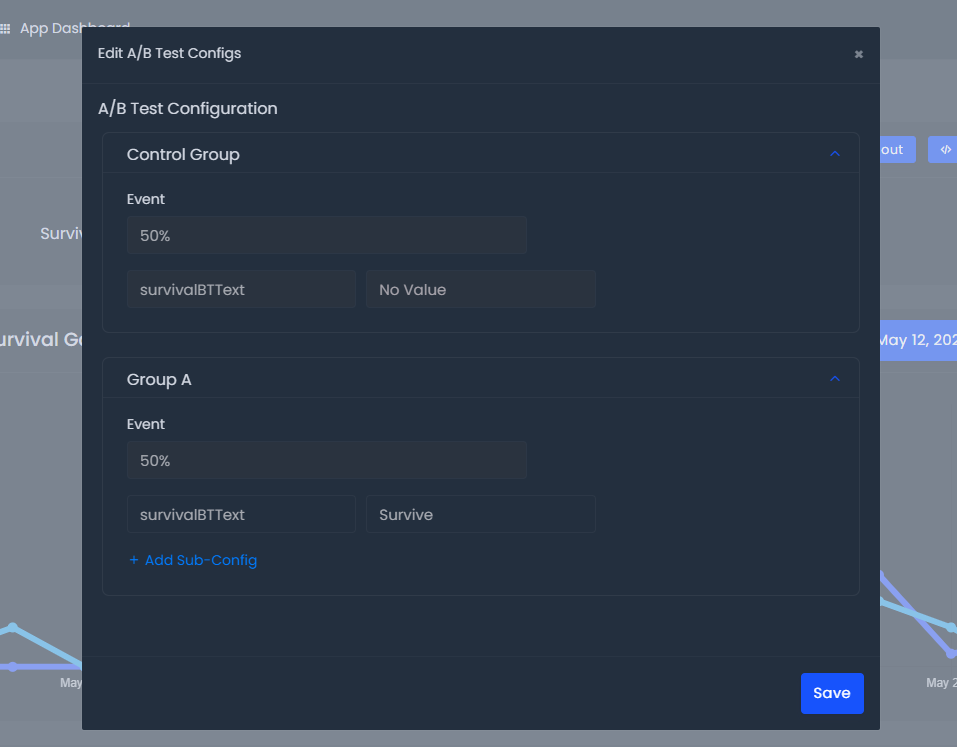 The following attributes on an A/B Test's Configs can be edited:

You can add configs or change the config keys and values. However, you cannot remove configs. 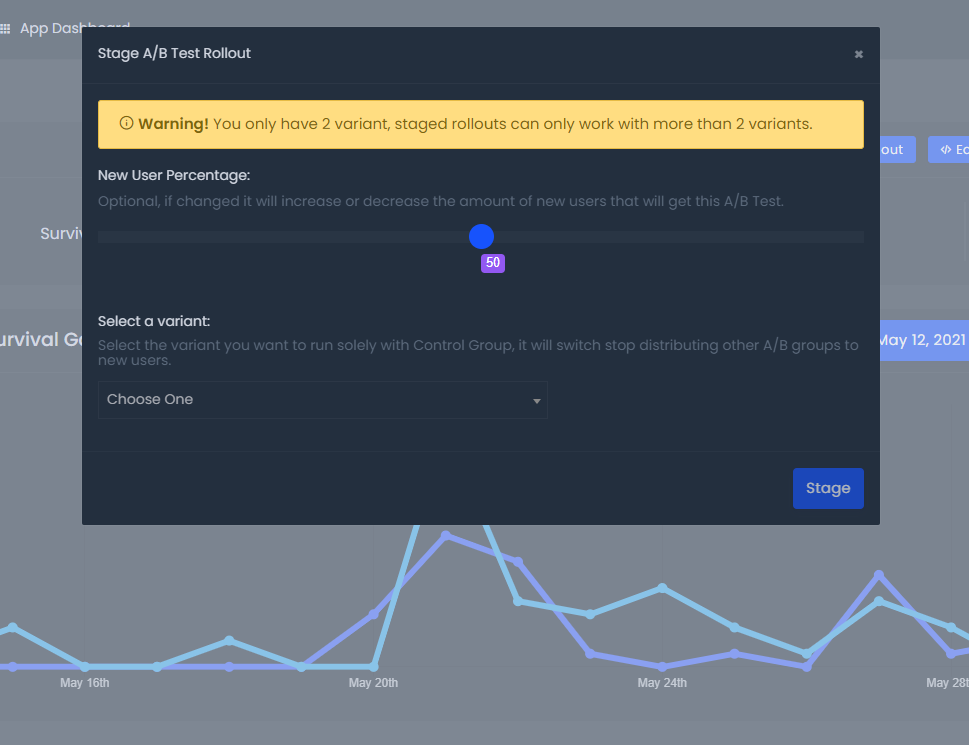 Stage rollouts allow you to select a winning variant and roll it out against the control group individually. Other variants apart of the test will stop delivering to new users, however existing users in the group will still be apart of the group until the test is in Full Rollout.

Select a group you want to elect to run parallel with Control Group. All new users will only be added to your staged group and the control group.

Note: If you only have 2 varient groups you will not be able to stage rollout. 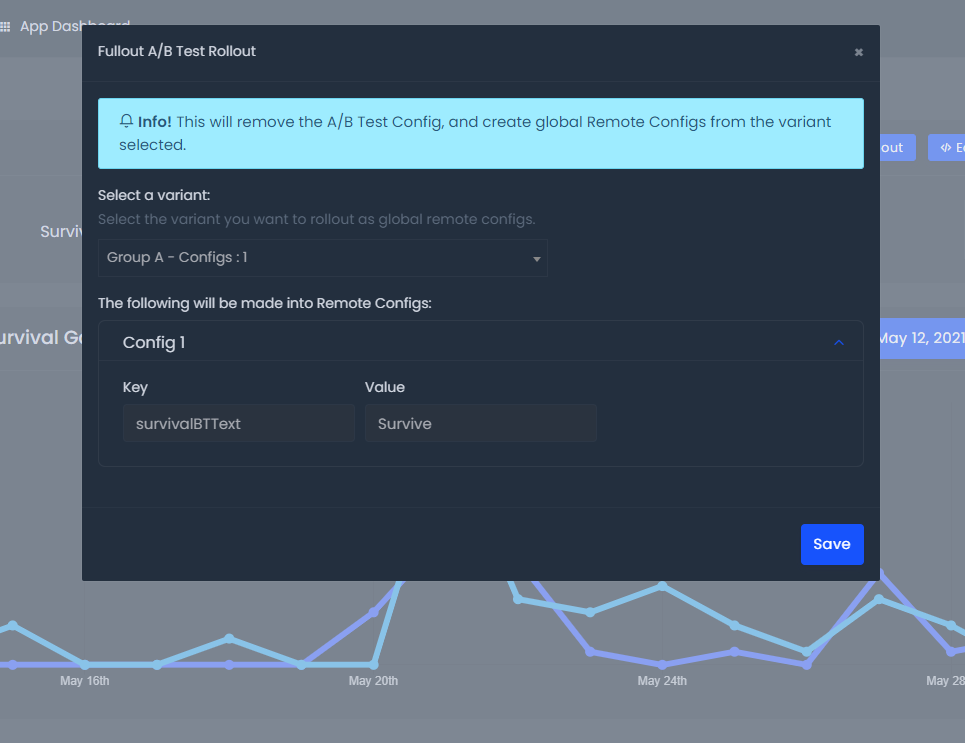 Full rollout allows you to select the variant that won and distribute it as a global remote config to all your players. This will end the A/B Test.

Select the group you want to full rollout to all your players. This group's configs will be turned into Remote Configs that will reach all users on your game and end the test.

Full Rollouts will end the test and put the test into an Archive state.

On the platform there are different states an A/B Test can be in. The following are a list of possible A/B Test states.

Active A/B Tests are running and distributing the test to new users.

Paused A/B Tests will stop distributing the test to new users, but will still deliver the group configs to current users already apart of the test.

If a test is paused, you can resume the test and make it active again.

Archived A/B Tests will stop distributing the test to all users and will not deliver group configs to current users that were apart of the test.

In an Archived state, you will still be able to see the user data from the test in the dashboard and filters.

Deleting a test cannot be undone.